It’s Opening Day, Astros fans. The 162-game marathon of a season is at last upon us.

All records are reset to 0-0 and fans are finally able to make it back to Minute-Maid Park after a long winter.

To begin the Astros’ 61st Opening Day, the Astros will face the Los Angeles Angels at Angels Stadium.

While sports betting in Texas still isn’t legal, when and if it does, that will add even more excitement to Astros baseball.

As we prepare for the much-anticipated start to Major League Baseball season, here are some fun facts you should know about the Houston Astros opening day history.

Finally, in 1990, their streak ended when the Reds opened the season on the road in a scheduled game against the Houston Astros.

2022 marks the second time Cincinnati will open the season on the road as they face the Atlanta Braves.

Budding star Bob Aspromonte was the first batter, hitting leadoff in the first inning on Opening Day. After singling to left field on the first pitch, Aspromonte scored the franchise’s first run when Al Spangler hit a triple. Aspromonte went 3-4 that day.

Tickets for the Astros’ 2004 season opener sold out in 15 minutes after the team put regular-season single-game tickets on sale at 8 a.m.

The Astros would face Bary Bonds and the San Francisco Giants on Opening Day. The team went on to sell 54,000 single-game tickets that day.

In a Sunday-night game at Minute Maid Park, the Astros defeated division-rival, the Texas Rangers, 8-2. This marked the franchise’s 4,000th win and its first Opening Day win since 2006.

The win was aided by Rick Ankiel’s three-run home run in the sixth inning. 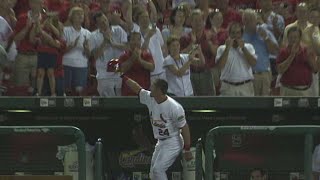 As the first domed stadium, the Astrodome was a marvel of sports architecture.

Built in the feverish pursuit of the impossible, there was one problem with the stadium – the lights. The clear Lucite panels that lined the dome created a glare causing Astros outfielders and their opponents to miss pop-ups as they were being blinded.

The first solution was to paint the ceiling to minimize the glare. But another issue arose as the lack of sunlight caused the grass to die.

The agrochemical company Monsanto was soon brought to the Astrodome to install its new synthetic grass product, “ChemGrass.” The installation was a great success.

Monsanto eventually capitalized on the popularity of its work in the Astrodome and renamed its grass replica AstroTurf.