It’s been an ongoing battle for CEO Ryan Crow to keep the doors of the Texas Card House in Dallas open.

Texas gambling laws are confusing. They outlaw nearly everything, but they also provide gray areas. For example, the Texas Constitution does not permit poker per se, but there is a loophole in the penal code. It permits poker clubs to operate provided the clubs don’t secure any economic benefits.

Beyond those clubs, the only other legal option for Texas poker players are online sweepstakes casinos, some of which offer poker.

Months after the Texas Card House (TCH) had its certificate of occupancy revoked, the business won a crucial appeal with the Board of Adjustment. And just when it looked like the company was in the clear, another legal battle ensued. Now the fight is on again.

Dallas’ top building inspection official, David Session, is now the one gunning for the card house. He sued the Board of Adjustment after Crow won his appeal.

A summary judgment involving the two opposing groups of city officials had been scheduled for Sept. 21, but the presiding judge decided to take the case to trial. The trial date had not been set, but Crow assumes it “will take place within a few weeks.” In a couple of days, he said, he will know more.

In attendance will be only the media and lawyers. There’ll be no jury, which means the outcome of the case will rest solely with the judge. Crow said he was pleased to know that the local Dallas media would cover the trial.

As the matter stands, there’s a strong likelihood the case will appear before the Texas Supreme Court. Should Session win his lawsuit against the board, then Crow said he will appeal. If Session loses, which Crow believes will happen, he will undoubtedly take the issue to the top Texas court.

How the quarrel began

A dead giveaway that a poker business in Texas is operating illegally is if it takes a rake from the game’s cash pot. So as not to fall on the wrong side of the law, card rooms across The Lone Star State operate under the guise of social clubs. This allows them to make their money by charging monthly and yearly membership fees instead of taking rakes.

However, many Texas legislators are of the impression that card rooms such as the Texas Card House, which runs four poker clubs across the state, are in fact receiving an “economic benefit” from the fees they charge.

Therein lies the problem and the reason why some politicians, not only in Dallas but in cities across Texas, have been trying to shut down poker rooms. In 2020, Dallas city officials initially approved Crow’s business model, which he’s stuck to ever since.

But when TCH tried to open another poker room in Dallas and some residents disapproved, city officials revisited their opinion on the constitutionality of poker in Texas altogether.

In January, Texas Card House had its Certificate of Occupancy revoked. Crow kept the doors of the business open while he filed an appeal. He won that appeal in March, but that’s when the chief building code administrator sued the board.According to the lawsuit,

A video shared by Texas poker player Kim Stone shows the March vote which ended up 5-0 in support of the Texas Card House: 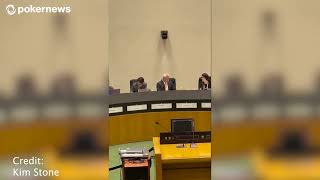 Texas, in the past few years, has seen an explosion of poker rooms thanks to the game’s increasing popularity. Keen to get in on the action are poker pros like Doug Polk, as well as vloggers Andrew Neeme and Brad Owen. Together, the three own the Lodge Card Club near Austin, known to be the largest room in Texas.

Money might talk for some folks, but not for all. No matter how much tax revenue the state collects from all Texas poker rooms, some politicians won’t get on board. Real concerns are brewing that the pending lawsuit against TCH Dallas could negatively impact all poker in Texas.

Suppose the case goes all the way up to the Texas Supreme Court and the city of Dallas emerges victorious. This would inevitably set a legal precedent on poker in The Lone Star State. However, an unfavorable ruling against the Texas Card House could render poker illegal in Texas. Consequently, poker clubs and rooms across the state would have to close their doors.

Nevertheless, Crow remains optimistic. He is confident he will win in the end.